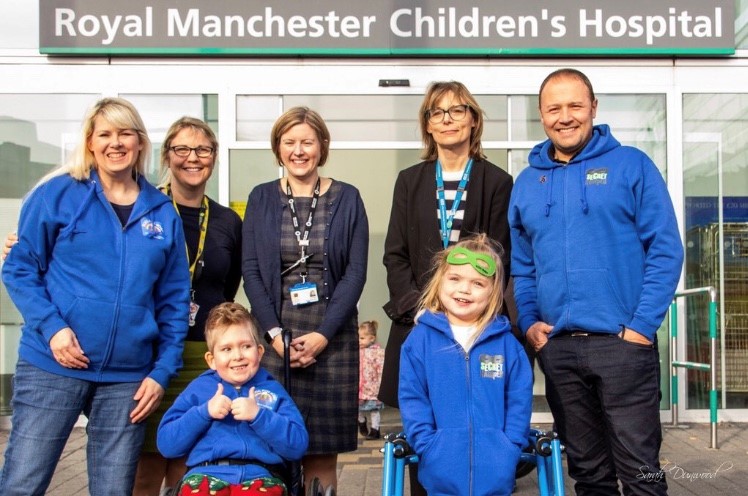 Earlier this week we travelled up to Manchester to deliver the 70 hampers that had been sponsored by 160 fellow #SBS winning businesses. Since we thought of the idea to bring together Small Business Sunday winners to give Theo Paphitis a unique gift for his recent 60th Birthday we’ve been counting down the days to the delivery.

Theo has had a link to Royal Manchester Children’s Hospital via its charity and has supported their #ManyHands appeal for the last few years so we knew the delivery would be extra special. We had previously raised money for the #ManyHands appeal with 20 #SBS winners sponsoring a space (as pictured above) on the Hamper van.

The guys in the Charity team had pulled out all the stops and were as excited as we were with the well anticipated delivery.

When we arrived we were met by Lucy & Lydia, lots of their colleagues and Humphrey the bear to help unload the hamper van.

We were also met by a film crew from ITV Granada who were there to report on our delivery as we had not one, but two special little helpers come along to distribute the hampers.

Once again we had the awe inspiring Noah Wall who had travelled down from Cumbria with his mum and nana, we also had the pleasure of little Ella Chadwick, last years Pride of Britain winner. Ella is no stranger to the hospital, having spent much of her young life in and out of the hospital amassing a huge 44 operations.

Once we had unloaded the van we had a group photo taken with staff from all levels of the hospital before heading off to surprise staff who worked on the wards.

The hampers went down a treat and since our delivery we had lots of messages from staff to say thank you.

It was great to see our delivery featured on ITV Granada Reports later in the day and coverage like this just make us more determined to reach our overall goal of 70 hospitals.

Next on our list is Great Ormond Street Children’s Hospital where we hope to have the help of Noah Wall and Ella Chadwick deliver in time for an early Christmas present to surprise the staff.

If you have been following our progress so far and Great Ormond Street has a special place in your heart you can contribute or sponsor a hamper or two here http://www.secrethamper.com/nhs-70