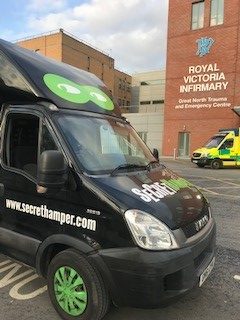 Since our first NHS70 delivery to Broomfield Hospital in Chelmsford back in August we have had many requests from around the UK from business owners to do the same in their areas. At present we have 15 locations in the pipeline and have decided that we really want to take this to a whole new level. Like us, you’re probably bored of reading and hearing negative news, especially the dreaded B word!  So, we are on a mission, a mission to reunite the UK with a simple act of kindness. We aim to take our NHS70 initiative to 70 hospitals around the country, if successful we could, with your help reach in excess of 200,000 NHS staff. Now that would be some great feel good news worthy of hearing about.

Earlier this week we delivered to our 2nd hospital, Newcastle’s Royal Victoria Infirmary. This took us a little longer than we’d hoped to complete, but considering the distance and not being known in the area, we did it. We were so humbled and privileged to be able join forces with Michelle Wall and her son Noah who already had plans to return to the hospital to make a special delivery of their own. You see Noah was born at the RVI and spent much of his young life there having been born with just 2% brain mass, spina bifida and hydrocephalous. We had first learnt about Noah some 18 months or so ago as his mum, Michelle, is a fellow #SBS winner (Theo Paphitis twitter competition) and we’d donated one of our Essex hampers as a auction item for a fundraising event she was organising for Noah. I spoke to Michelle and told her of our plans and we both agreed that it would be great to link our deliveries to make it extra special. The date was set, 13th December, all we had to do was get 70 hampers sponsored!

Fortunately we were introduced to the North East England Chamber of Commerce and became a member. This was the best decision we could have made. With just a week to go before the delivery we travelled to Newcastle for a Christmas lunch/networking event hosted by the chamber. At the event we were able to have a stand and the opportunity to speak on stage, by the end of the day we had 55 of the 70 hampers sponsored!

The remaining hampers were sponsored on the day of delivery after we were spotted on the news. They were sponsored by Gateshead FC manager Steve Watson and some Newcastle Utd players, past and present. We were also touched that Jason Vale who has written about us in his new book, Create Magic sponsored 10 of the hampers along with generously committing to supplying copies of the book for all of our NHS70 hampers. Another well known name who supported our campaign by sponsoring hampers was Newcastle’s own Vicky Pattison of Geordie Shore fame. Vicky was amazing and even did a few social media posts for us too. She also had met Noah previously too so it was extra special for her.

The day of the delivery was unbelievable. We arrived at the hospital at the same time as Noah and his mum who had travelled over from Cumbria. Arriving at the same time too were news crews from both ITV and the BBC. It was surreal. Ultimately they had come along to follow Noah’s journey, as he has defied the odds and medical science by being here today. It was just so amazing to play a small part in this special day.

As we entered the main reception of the hospital there was a huge gathering of staff from all areas within the hospital and lots of others peering over the balcony from the floors above.  The Lord Mayor and Mayoress of Newcastle were also in attendance. We managed to off load 12 hampers, due to space in the foyer, with the rest being delivered to the loading bay for distribution later in the day.

It was great to meet so many different staff all playing important roles within the hospital, they were genuinely touched too by the show of appreciation from the hampers that had been sponsored.

We went on to visit a few wards with Noah and the Mayor & Mayoress before we left to go to the ITV Tyne Tees studios to be interviewed for the early evening news. It was an amazing experience and quite an adrenaline rush to know that our delivery had made the news. But, it didn’t stop there, straight after the interview on ITV it was back across town to the BBC studios where Noah and his mum this time where interviewed on the evening news, whilst Noah’s sister, Nana and I watched from the control room.

After the news we said our goodbyes and set off for home. It had been an incredible day, one that I won’t forget for a long time to come. After setting off at 4am I finally arrived home at 2am exhausted!

After a few hours rest its now time to hit the road running and start working on our next location, Birmingham Children’s Hospital. Noah and his mum Shelly enjoyed the day so much that they want to help us deliver to other children’s hospitals around the UK as they think that his story will help spread hope and inspiration to others.

Here are a couple of clips from BBC & ITV news.